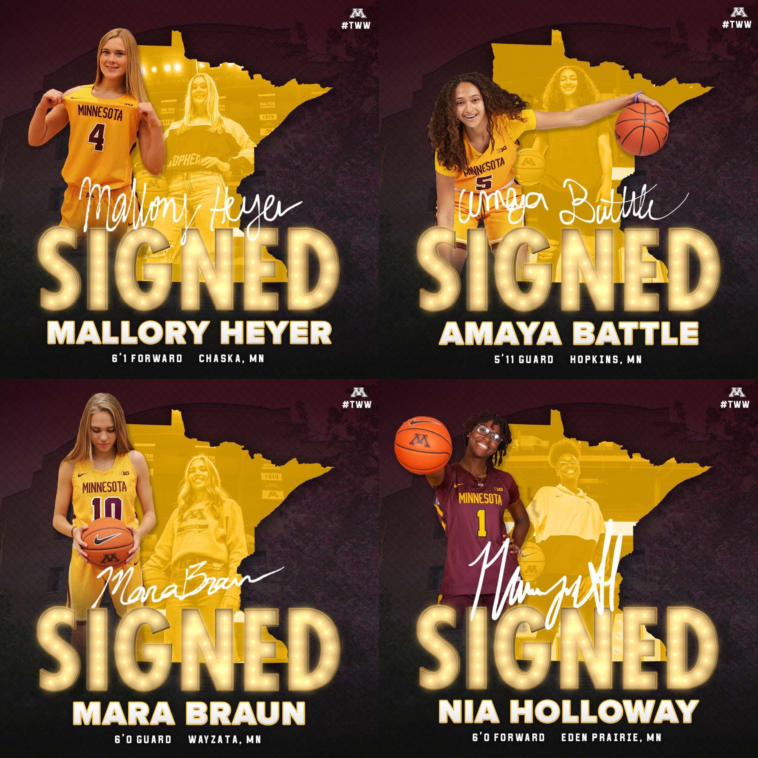 Wednesday November 10th, 2021. Gopher Women’s Basketball fans, do yourself a favor and mark this day down. Put it somewhere safe and in four years, come back to that date and take in all that the Class of 2022 has done as they will at that time be preparing for their senior season in maroon and gold. My guess is your eyes will be getting big, a huge smile should be on your face as you think back on packed gyms, numerous entertaining wins, unstoppable performances, and success that at times seemed to not be possible for the program rush through the slideshow of memories in your head. All of that could be on the other side of that date that I advised you to remember. Why is that the date I have marked as a changing point? Well, that’s a pretty simple answer. Composed of four players from the state of Minnesota, the Gophers have put pen to paper on THEE highest rated recruiting class in program history. Their names are Mallory Heyer (Jr-All Star MN 2022 #2) , Amaya Battle (Jr-All Star MN 2022 #4), Nia Holloway  (Jr-All Star MN 2022 #5) and Mara Braun (Jr-All Star MN 2022 #3) and they just might be the four puzzle pieces that bring the vision of Finals Fours, Big Ten Championships and defining packed crowds in The Barn into focus.

Striking Gold On and Off the Court:

When discussing this class, it’s imperative to mention how each not only comes from the state but also a big-time program in the state. Programs such as Eden Prairie, Wayzata, the traditional powerhouse in Hopkins and the defending AAAA Champion Chaska are all represented in this 2022 class. That could mean four big fan bases making their way to Williams Arena following these four big-time players. Outside of high school, this group of four come from three of the top AAU programs in not only the state, but the country in North Tartan, Minnesota Fury, and Metro Stars. That means these are four young ladies who will be going from intense rivals in both High School and AAU to teammates in the Maroon and Gold.

When asking Minnesota Fury’s Nick Storm, he explained “These four come from great families and are players other players will want to play with. They are Diverse in terms of AAU programs, high school Programs and it’s important that they are coming from four different communities, coaches, and backgrounds”

When talking with North Tartan’s Bill Larson, he said “This is a fantastic group of young ladies both on and off the court. They complement each other’s games on the court but off the court they are great people, great students and each comes from a program with a dedicated fan base that will want to follow their careers in college.”

Andy Meinhardt of the Metro Stars described this class in saying “The talent and competitiveness of this recruiting class has a chance to reshape the Gopher basketball program for years to come.  They are not just good Minnesota players, or Midwest players, these athletes have shown that they can compete and win on a national stage. Not only that, but they are also great kids and excellent students and will make great role models at the University.”

It also was clear that the Gopher’s coaching staff understand the special group of players that are coming into the program.

Head Coach Lindsay Whalen said of this class “We are thrilled to announce the signing of four talented young women to our program. They each exemplify our program values on and off the floor. They all have very big goals to leave a lasting legacy here at the U of M.”

Associate head coach Carly Thibault-Dudonis continued by saying “We are so excited to welcome four amazing young women into our Gopher family. They are all extremely talented individuals, but what makes them so special is their selflessness and the bond they’ve already started to create with one another. They embody what it means to be a Gopher by their work ethic and by being great teammates every day. I have no doubt in my mind that they will play in a way that makes others from the state want to come join them!”

Assistant coach Kelly Curry went on to say “Our Gopher family officially welcomed four special women today. They have a vision and it all started with staying home…. Basketball fans, get ready to watch this exceptional group of women for years to come.”

The newest assistant coach this season Shimmy Gray-Miller also explained how she can see and feel how this group will effect multiple aspects of the program by saying “I’ve only been a Gopher for a short while and these young women were already committed before I arrived but as I’ve gotten to know them and watch them play, the immediate impact they will make on our team and program culture is obvious. Great people, players, and competitors!”

On the court Nick Storm continued “The skillsets of these four complement each other really well. They each can play multiple different positions, and each bring a different ability to the team.”

Bill Larson added “This set of four, I predict will experience a lot of success with the program and won’t have to wait till their sophomore or junior years to experience it. I see them having success as freshman right from the jump.”

Recruiting Tip of the Iceberg:

When asking AAU coaches around the state about what this class could mean going forward in terms of recruiting in the state of Minnesota, they did not hold back explaining how important this group could be going forward for the program.

Andy Meinhardt said in his opinion “There is a deep talent pool across all age levels in Minnesota right now and this could just be the tip of the iceberg if more in-state players choose to stay home and play for the Gophers.”

Nick Storm added why he felt this was monumental for the program in saying “After unfortunately missing out on some of the top names in the state in 2020 and 2021, this was not only a statement class but also a necessary class for the Gophers. Getting this group of four and the high ranking of the class definitely has got the attention of highly ranked players such as Tessa Johnson (Jr-All Star MN 2023 #1), Taylor Woodson (Jr-All Star MN 2023 #2) and Olivia Olson (Jr-All Star 2024 MN #1) among others as well.”

Gerard Coury of North Tartan explained “This class could start something special within the state. The state of Minnesota for years has produced talented basketball but for a myriad of reasons student athletes have elected to attend schools outside the state. This group could entice future young ladies to attend the UofM. Potentially “staying home” could be trendy.

This class signing is not enough. These young ladies will need to continue to stay motivated. We are always telling our North Tartan players it’s not always about getting offers since everybody will get offers, it’s about getting ready to play at the next level.  This group will need to make sure they are ready. The staff will need to do their part and develop this group so they can go into future living rooms and tell families about the improvement of their players. Lastly and most importantly they need to win. Winning brings excitement and attention! Not sure middle of the pack Big Ten and playing in WNIT but challenging for Big Ten championships and playing into the second weekend and beyond of the NCAA tournament.”

Patience is a Virtue:

My second and final note to Gopher fans is while this class makes it nearly impossible to not preview or think about what these four could accomplish, it will be a year of waiting before they are seen on the Williams Arena floor. They each have one more high school season and I suggest if you can, finding your way to their respective gyms to get a glimpse of the exciting talent that will be joining the team in the fall of 2022. One thing I can guarantee all Gopher fans, this top 10 ranked recruiting class is worth the wait and they truly could be the class that puts the Minnesota Gophers on the national scene for the many years to come. 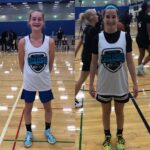 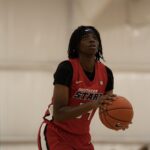